Thanks to a most generous grant from the Friends of the National Libraries’ B. H. Breslauer Fund, the Library has recently been able to acquire a beautiful copy of one of the most famous nineteenth-century collaborations between a poet and a photographer: Alfred, Lord Tennyson’s Idylls of the King, and Other Poems, 1875, photographically illustrated by Julia Margaret Cameron. A collection of twelve narrative poems that retells the legend of King Arthur, Tennyson published Idylls of the King to great public acclaim at the end of June 1859. 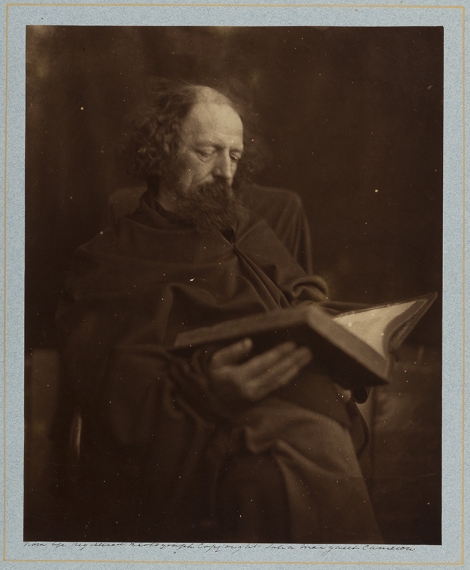 Julia Margaret Cameron (1815-1879) is one of the most celebrated women in the history of photography, known for her innovative work when photography was still in its infancy. Her photographs were rule-breaking: purposely out of focus, and often including smudges, scratches and other traces of the artist’s process. Best known for her powerful portraits, she also posed her sitters as characters from Biblical, historical or allegorical stories. Along with Oscar Rejlander, Lewis Carroll and Clementina Hawarden, Cameron was the focus of last year’s ‘Victorian Giants’ exhibition at the National Portrait Gallery in London.

In the summer of 1874, Cameron was living next door to Alfred, Lord Tennyson (1809-1892) at Farringford, Freshwater, on the Isle of Wight. Tennyson had taken Morte D’Arthur published in 1842 and expanded it into Idylls of the King in 1859. He asked Cameron to make illustrations for a new publication of these poems and she produced over 200 prints from wet-plate collodion-on-glass negatives. Unfortunately, the publisher chose only two to be reformatted as wood-engravings and they did not reproduce well in the final book.

At Tennyson’s encouragement, Cameron went on to produce a book of her own with albumen silver prints interspersed with texts by Tennyson lithographed from Cameron’s hand-writing. The first volume appeared in January 1875 and the second in May, selling for six guineas. Only a dozen or so copies are known to have survived. The frontispiece for each volume was a portrait of Tennyson dressed as “The Dirty Monk,” dated 1869. The Library has acquired the second volume, which contains 13 albumen prints including a frontispiece photograph of Tennyson dressed as ‘The Dirty Monk’ and staged groupings of other sitters wearing their remarkable costumes with flair. 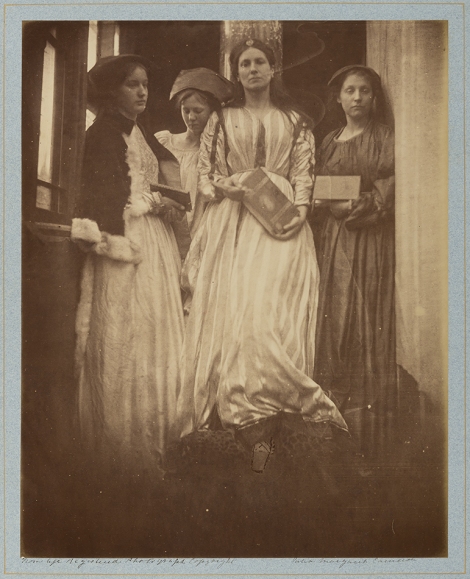 ‘The Princess’. Albumen print by Julia Margaret Cameron. From Alfred, Lord Tennyson, Idylls of the King, and Other Poems (London, 1875). University of St Andrews Library ALB-150-05.

The acquisition of this book strengthens the Library’s holdings of early photographic collections, an area in which we already hold outstanding material. Our photographic collection is one of the largest in Scotland with strengths in pioneering photography, social documentary and Scottish culture. Our early collections reflect the great importance of St Andrews as a centre for the development of the photographic art form in the nineteenth century. In the 1840s, the townsfolk and University academics created some of the most important images in the history of photography. The work of key St Andrews photographers, along with examples from other major photographers, is held in Special Collections and is a major resource for photographic historians throughout the world. The large collection of photographs is enhanced by considerable collections of correspondence.

Elaine before the King’. Albumen print by Julia Margaret Cameron. From Alfred, Lord Tennyson, Idylls of the King, and Other Poems (London, 1875). University of St Andrews Library ALB-150-11.

The book joins other Cameron material already in our collections and available for research: Alfred, Lord Tennyson and his Friends (London, 1893) which includes photogravures from Cameron’s negatives, and Cameron’s Victorian Photographs of Famous Men and Fair Women (London, 1926).  In the Introduction to Alfred, Lord Tennyson And His Friends Cameron’s son quotes her words, ‘When I have had these men before my camera my whole soul has endeavoured to do its duty towards them recording faithfully the greatness of the inner as well as the features of the outer man’. It also includes a reminiscence about Cameron by Anne Thackeray Ritchie, the daughter of author William Makepeace Thackeray:

‘Mrs Cameron’s power was a peculiar one … She had a directness and originality … which she applied to other things than chemicals … and also expected much from her sitters … We trembled (or we should have trembled had we dared to do so) when the round black eye of the camera turned upon us, we felt what consequences, what disastrous waste … might ensue from any passing shiver of emotion’. 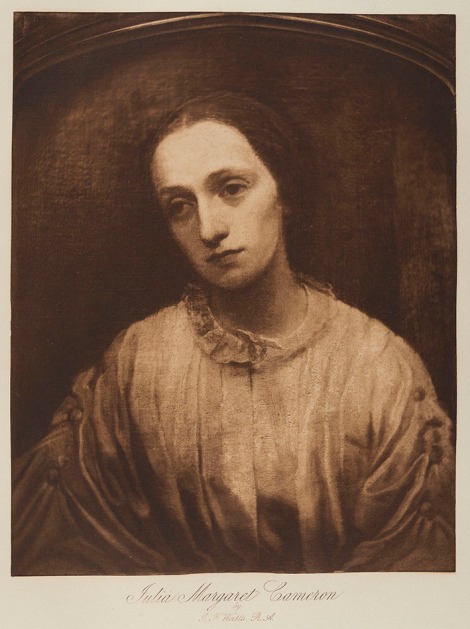 Photogravure of Anne Isabella Thackeray from a negative by Julia Margaret Cameron from Alfred, Lord Tennyson And His Friends, 1893. University of St Andrews Library Photo TR681.F3T46.

St Andrews was one of the first institutions in the UK to recognise and promote the genre of the photographically illustrated book and we hold some of the most important examples of the type, including Henry Fox Talbot’s Sun Pictures in Scotland (London, 1845), widely recognized as the first photographically illustrated book completed for public sale. Sun Pictures depicts Talbot’s travels through Scotland in October 1844, inspired by the life and writings of Sir Walter Scott (1771-1832). The 200-foot-high Scott Monument in Edinburgh was nearly completed when Talbot photographed it, and he included it as the second plate in Sun Pictures.

Idylls is currently receiving some conservation treatment but we look forward to making it available for research, teaching and enjoyment very soon.