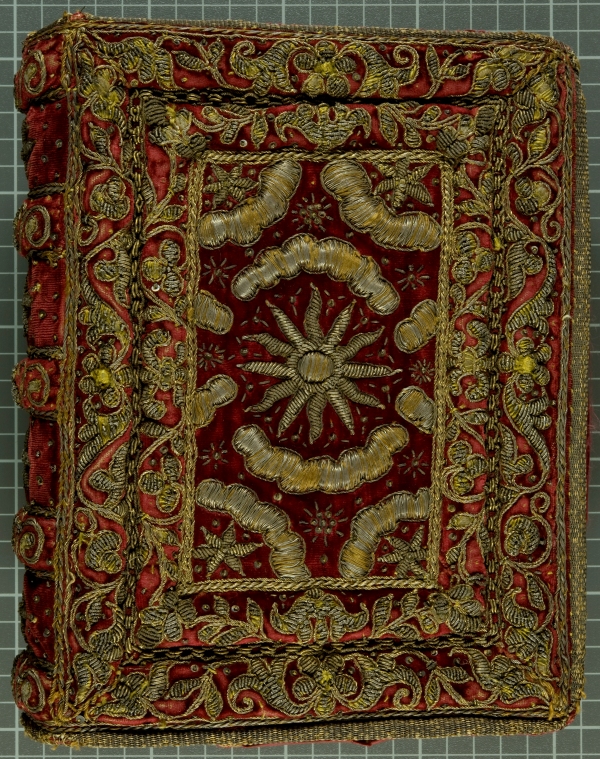 The embroidered front cover of the Wardlaw Bible, a copy of the 1640 Geneva-Tomson Bible presented by Charles I to Sir Henry Wardlaw of Pitreavie for his service to Queen Anne (St Andrews copy at Bib BS170.C40).

The engraved title page of the Wardlaw Bible.

Well, we’ve saved the best for last. The final post of this year-long series of fantastic bindings has been reserved for what is probably the most significant and beautiful binding in our collection: the Wardlaw Bible. This Bible is a copy of the c. 1640 Amsterdam printing of the Geneva Bible and New Testament along with the Edinburgh 1640 printing of The CL. Psalmes of David in meeter, according as they are sung in the Church of Scotland. Both of these works are in very clean condition, and the Psalter is quite rare (only five other copies reported on ESTC), however it is not the contents between the covers that we are interested in, it is the covers themselves.

The full red velvet and embroidered slip cover, removed from the Wardlaw Bible. The cover and its embroidery work are contemporary with the Bible and can be dated to the second half of the 17th century.

The contemporary green velvet cover of the Wardlaw Bible, c. 1640.

This Bible has been bound in contemporary green velvet over boards (see right) with embroidered board edges, with all its edges having been gilt and gauffered. This binding alone is a lovely and well-preserved example of early 17th century textile work , however, it is almost completely hidden by its even more beautiful slip-cover. The Bible has a contemporary red velvet slip-cover which has been heavily embroidered in gold and silver thread and decorated with floral borders and a central emblem of the Wardlaw family. This velvet slip-cover is quite heavy when removed from the Bible, which speaks to the amount of embroidering that went into its production. The whole thing has been presented with a contemporary green velvet bag with a green threaded tassel (see below). 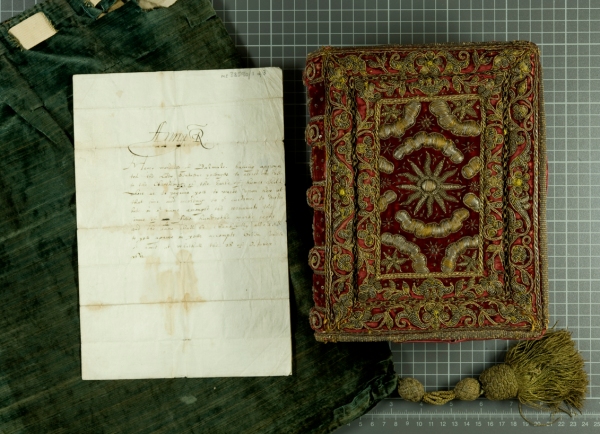 The Wardlaw Bible, the green velvet bag that the Bible was presented with, and a letter from Queen Anne to Sir Henry Wardlaw (dated 28 October 1612).

The second title page of the Wardlaw Bible, where the marriage of William Wardlaw to Elizabeth Hay, and the birth of their daughter, has been recorded.

This Bible, along with a fine pair of gauntlet gloves (see below), was presented to the family of Sir Henry Wardlaw, 1st Baronet of Pitreavie, Fife, by Charles I for his services to Queen Anne. Sir Henry had been made chancellor to Queen Anne in 1602 , Hereditary Chamberlain in 1613 and a Baronet by Charles I in 1631.  Charles referred to Henry in a letter dated Whitehall, November 1626, as a gentleman “who has been an old and faithful servant to our late dear father and mother and unto us”. It is possible that this Bible was actually presented to Sir Henry Wardlaw, 2nd Baronet of Pitreavie, as the 1st Baronet died in 1639, potentially before this edition of the Bible was published. The Wardlaw Bible remained in the family, and for a time was even used to record the marriage of one of Sir Henry’s grandchildren, William Wardlaw (18th century) to Elizabeth Hay (25 November 1712) and the birth of their daughter, Elizabeth Wardlaw (see left). 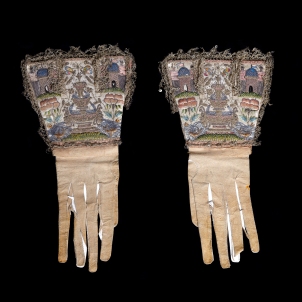 The embroidered gloves presented to Sir Henry Wardlaw by Charles I.

The pair of gauntlet gloves which were presented to Sir Henry are a particularly fine pair of gauntlet gloves, dated 1600-1630. The gloves are of pale brown leather with separately applied tabbed ivory satin gauntlet cuffs, embroidered on both sides with fountains with grotesque water spouts, goldfish, pink flowers in floss silks, gilt purl coils, minute gilt sequins, the tabs with couched silk threads wrapped with silver strip, floss silks and sequins in the form of castle buildings with smoking chimneys, lined with salmon pink tabby weaves silk, edged with gold bobbin lace and elliptical spangles. They’re English, but it is not clear who made them or exactly where they were made. The gloves are now kept by the University Museums and Collections Department and will be featured in an Inspired by MUSA talk given on Thursday, 7 June 2012, from 1:00-1:30pm, by Dr Jaqueline Rose from the School of History.

All of these items (the Bible, the gloves, the letter from Queen Anne, and some family correspondence) was presented to the Library in 2001 by Lady Hanbury-Tenison and Major Alastair J. Rennie, descendants of the Wardlaw family. This is a gorgeous book to behold, and it has lasted almost 400 years in near-perfect condition. It is truly deserving of this last post on fantastic bindings.

6 responses to “52 Weeks of Fantastic Bindings, Week 52: an embroidered Bible presented by Charles I, on behalf of Queen Anne, to Sir Harry Wardlaw of Pitreavie”