On the birthday of Dr Elsie Maud Inglis, we share with you some of the highlights from the records of University Hall (the first female student residence in Scotland, opened in 1896) which connect Dr Inglis with St Andrews during the First World War. 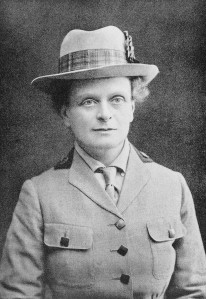 Dr Elsie Maud Inglis (1864-1917), Scottish doctor, suffragist and founder of the Scottish Women’s Hospitals was born in Naini Tal, India on the 16 August. Elsie was the second daughter of John Inglis, a chief commissioner in the Indian civil service who moved his family home to Edinburgh in 1878. After four years at the Edinburgh Institute for the Education of Young Ladies, Elsie attended finishing school in Paris before beginning her medical training at Sophia Jex-Blake’s newly opened Edinburgh School of Medicine for Women. With her father’s support, in 1889 she co-founded the Medical College for Women. Completing her training at Glasgow Royal Infirmary, Inglis qualified as a licentiate at both the Royal College of Physicians and Surgeons, Edinburgh, and the Faculty of Physicians and Surgeons of Glasgow in 1892. She founded a maternity hospital for the poor in Edinburgh in 1901, staffed only by women.

Elsie’s father was supportive of her education, and in turn, Elsie was supportive of her niece and namesake Elsie Florence Inglis’ medical education. The earliest link between Elsie and St Andrews is a series of her letters to the warden of University Hall, Frances Melville, regarding a room for Florence. Florence wrote that “owing to the unsatisfactory conditions of our medical education here, and the fact that our School of Medicine has been sold, I am thinking of leaving Edinburgh University,” (UYUY37781/A/7/10). Her aunt Elsie was concerned about the cost of the accommodation, but a room was found in the house ’across the road’ from University Hall, at the top with a view of the sea. She studied medicine at St Andrews from 1908/09 to 1909/10. She would later receive her MBChB from Edinburgh in 1914. 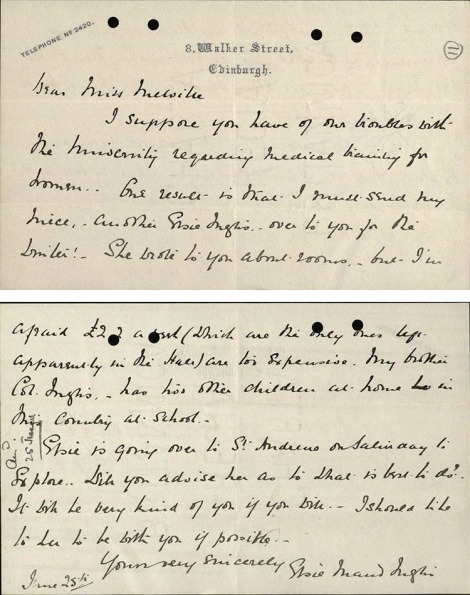 As already highlighted on the blog, Elise Maud Inglis was involved in the women’s suffrage movement. She was honorary secretary of the Edinburgh National Society for Women’s Suffrage as well as honorary secretary of the Scottish Federation of Women’s Suffrage Societies. With the outbreak of war in 1914, a hospitals committee was formed as part of the Edinburgh National Society for Women’s Suffrage, which led to the formation of the Scottish Women’s Hospitals for Foreign Service (SWH). These set up and supported 14 medical units staffed by women as nurses, doctors, ambulance drivers, cooks and orderlies.

A Red Cross Voluntary Detachment (VAD Fife 68) was started by Mildred Dobson, Warden of University Hall, in 1912-1913 which continued throughout the War. The contribution of the ‘Hall’ students to the war effort is evident in the records of University Hall, which include letters of thanks for donations sent to the Scottish Women’s Hospitals for Foreign Service.

Though the War Office declined the assistance of the SWH, the French and Belgian Red Cross and the Serbs accepted their help. The first units were sent off by Inglis to France in November 1914, referred to in a letter sent to Miss Mildred Dobson at University Hall (below), and the second unit went to Serbia in January 1915. Elsie herself served in 1915 at the SWH in Kragujevac, Serbia. She was put in charge of the prisoner of war hospital after the German invasion of Serbia, and on return to Britain after a period of internment, became the first woman to be decorated with the Order of the White Eagle (the highest honour given in Serbia) on the 3 April 1916.

St Andrews graduate and one of 8 Campbell sisters to attend St Andrews, Dr Adeline Herbert Campbell (MA 1909, MBChB, 1912) also served with the SWH in Serbia under Inglis. Dr Campbell was decorated with the Honorary Red Cross, Military Cross and Order of Saba. 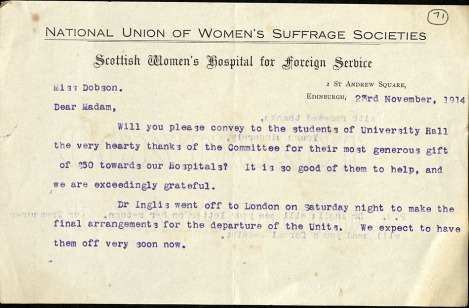 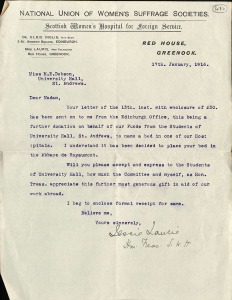 Letter of thanks from Jessie Laurie, Scottish Women’s Hospital for Foreign Service to Mildred Dobson (17 January 1916) for the gift of £50 for a bed at Royaumont Hospital, France (UYUY37781/G/41b)

University Hall students’ financial assistance supplied beds for the SWH units. The archive contains letters from the SWH thanking the students for providing the funds for a bed at the Abbaye de Royaumont in France.

Royaumont Abbey, the property of Edouard Goüin, was a former Cistercian abbey, located near Asnières-sur-Oise in Val-d’Oise. A hospital was established there by Elise Inglis and Dr Frances Ivens in January 1915. The hospital operated continuously until March 1919 and, as a French Red Cross hospital, treated mostly French, Senegalese and North African soldiers. 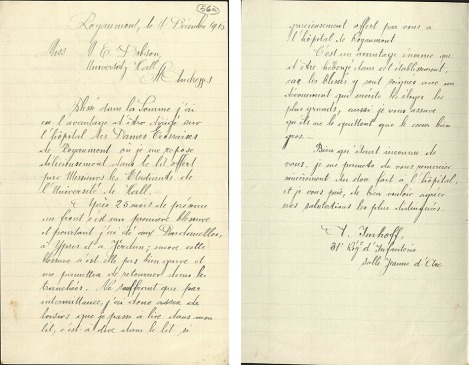 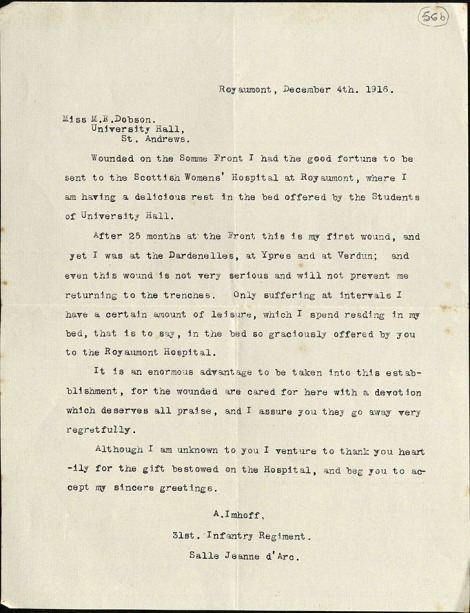 The importance of the work done at Royaumont is best shown by a letter sent from a wounded Alsatian soldier in December 1916 to Mildred Dobson. A. Imhoff, of the 31st Infantry Regiment, wounded at the Somme Front, sends his thanks for the

“delicious rest in the bed offered by the Students of University Hall”. 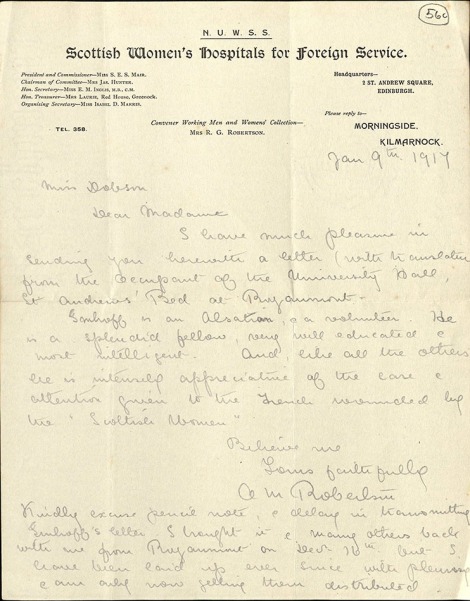 Imhoff served 25 months at the Front, at Dardenelles, Ypres and Verdun, and praises the devotion shown by the staff to the care of those wounded. In the covering letter, Mrs R. G. Robertson, convener of the SWH, expresses the appreciation shown by the French for the “Scottish Women” running the hospital. 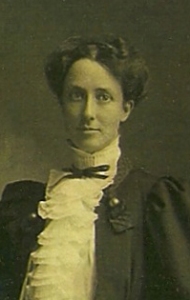 Elsie’s niece was also to serve at Royaumont, as did the first woman graduate of St Andrews University, Dr Agnes Savill (nee Blackadder). Savill played a central role as radiographer at Royaumont, making use of the x-ray car that had been donated by French General Le Bon. Savill also borrowed a pianola for the hospital, believing music to be important for health – an idea she proposed in her 1923 publication Music, Health and Character which recounts her growing appreciation of music through the use of a pianola over time. 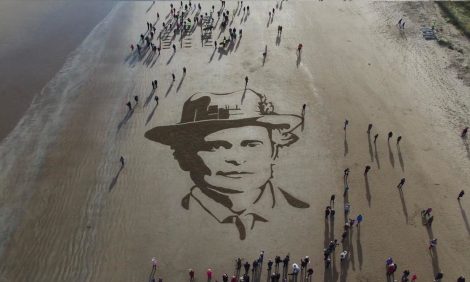 Sadly Dr Elsie Inglis didn’t see the end of the war. She was diagnosed with a terminal illness and returned to Britain in November 1917. She died the day after she arrived home. As part of Danny Boyle’s Armistice Commission for 14-18 Now with the National Theatre of Scotland, Dr Elsie Inglis was commemorated with a sand portrait on St Andrews West Sands on 11 November 2018 – https://www.pagesofthesea.org.uk/.

Following on from the above story, it has been brought to our attention that Elsie Maud Inglis’ connections to the town of St Andrews are in fact earlier than her first interactions with University Hall in 1908. From Jane Claydon’s work on the history of St. Leonards School we know that on the 4th September 1888, Elsie was in St Andrews with her niece, May Simson, bathing below the Castle. After getting into difficulties in the water, they were rescued by a St. Leonards Senior, Dorothy Meiklejohn who received a Bronze Medal from the Royal Humane Society for her bravery. May Simson was the daughter of Elsie’s older sister, Amy. Both May and Amy’s elder daughter, Mary, went to St. Leonards School.